Globema at the CIS 2012 trade fair in China 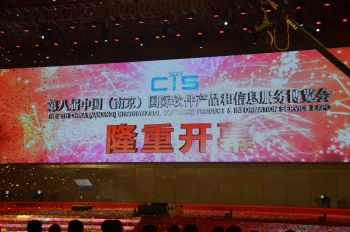 The China (Nanjing) International Software Product & Information Service Trade Fair – CIS 2012 was held at Nanjing International Exhibition Center from September 6 to 9. The theme of this year’s conference was “Integration, Intelligence, Innovation”. Globema participated in the event for the second time.

The products and services of 10 Polish IT companies, including Globema, were presented and actively promoted at the booth of Trade and Investment Promotion Sector of the Polish Consulate in Shanghai.

CIS Fair 2012 was another event in China with Globema’s participation. In 2010, the company was present at the EXPO Trade Fairs in Shanghai, where Marek Maniecki, VP of Globema, gave a presentation on Smart Grid software and research, development & implementation projects in Europe.

CIS Fair 2012 was held for the eighth time. Every edition has a growing interest of exhibitors and visitors. Same this year: the fair hosted 1005 companies from more than 30 countries and geographic regions. The CIS Conference was awarded “China Top 10 Most Influential Brands Expo” and “High Quality Exhibition in Yanytze Delta, China” awards and in the wide opinion of the organizers and past participants is one of the best exhibitions of the IT industry in China.