In the second stage of a Pilot Project “Intelligent Peninsula” Globema cooperated with Energa Operator S.A. (EOP) in evaluating models of medium and low voltage grids for enhancing operational efficiency. The research was conducted on a selected test area of Hel Peninsula. The main goal of the project was to assess the possibility of increasing operational efficiency of distribution grid through technical calculations along with output verification. Energy grid in the area of Jastarnia has been chosen to conduct the test and differential comparison between normal and modified tie points designated by ELGrid optimization guidelines. Testing area covered 17 substations supplying 1,5 thousand customers and losses were cut from 9% to 13%.

The task of analysing the power flow and tie points optimization was assigned to Globema. Tie points optimization is particularly important as it can lead to cutting losses in energy distribution without any external investments. Second stage of the project covered area that was in 90% covered by the AMI system.

Globema optimized grid configuration and voltage levels along with suggested switch positions. In addition to the data provided by AMI, also the data about street lighting consumption, customers without AMI and seasonal recipients were taken into account in power flow calculations performed by Globema ELGrid system.

Vacation season was adopted as a testing period as it is the time of greatest energy demand and thus most suited to conduct differential comparisons. Switchovers were performed on July 31st and August 1st adopting month of July as a reference level. For the purpose of analysis, 10-day periods with a very similar energy consumption were chosen in each month. Modifications in grid configuration resulted in lowering total losses by 1.5%, which is a very promising result. Conducted research confirmed the predicted possibility of cutting energy losses, what leads to increasing energy efficiency and lowering the costs of covering statistical difference in energy distribution.

Img1. Electricity grid in the city of Jastarnia 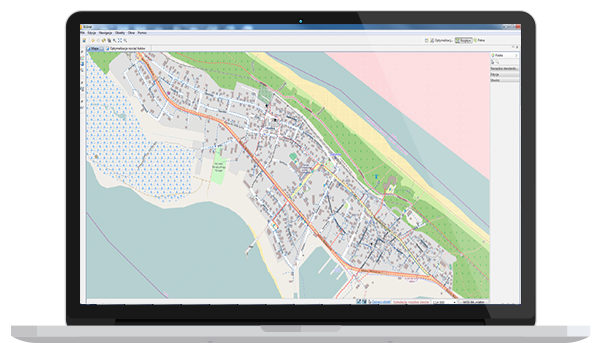 ELGrid is a decision support system that optimizes electric power network operation and investment planning. The solution also forecasts the electricity demand and energy production from renewable energy sources (RES), while also helping to optimize the strategy for energy storage. Developed analytical algorithms, in addition to basic power calculations such as power flow and estimates of peak loads, are based on artificial intelligence (neural networks) and spatial analysis methods. The solution is primarily designed for energy Distribution System Operators (DSOs).