The development of renewable and distributed energy sources as well as increasing environmental awareness and public recognition of energy demand and supply issues has contributed to a constant growth of new microgrids and prosumer networks in the last two decades. Microgrids are energy microsystems with own energy sources, own consumers and often also with own energy storages. In order to utilize the synergistic effect of these systems, it is necessary to properly manage their individual components during operation.

The prerequisite for effective management is the availability of detailed energy generation and demand forecasts (similarly as it is the case with large-scale power systems). In case of renewable energy sources, which are heavily influenced by atmospheric conditions, energy generation forecasts are the most important. Forecasts relative to energy generation from other sources, e.g. sources operated in combined systems, may also be significant. It is also important to identify the energy demand of all consumers which cannot be controlled in terms of their momentary demand (i.e. uncontrollable consumers). Basing on these forecasts, it will be possible to perform time optimization of the operation of these individual components of the energy microsystem. The result, depending on company’s needs, may be for example reduction of electric energy costs, adherence to declared peak powers or maximized utilization of internal power sources operating in a cogeneration mode. This objective should be defined within the scope of a preliminary energy audit of the company. Optimization will provide the answer on how individual pieces of equipment should be operated in order to accomplish the objective. It shall be noted that it is possible to optimize future operational scenarios (e.g. up to several days in advance) as well as optimize the microsystem operation reactively. This will allow to combine, to a certain extent, energy optimization with optimization of company technological processes, in particular when planning several days in advance.

IT support for microgrid operators

Forecasting of the electric energy demand and generation depending on the facility in question may be approached differently, depending on the facility profile. In order to forecast the energy demand, the following data can be used: process data, meteorological data and various measurement data. However forecasting of renewable energy sources output requires mostly meteorological data, which can be obtained freely in the Internet. Utilization of such free forecasts is important due to the relatively high costs of detailed forecast data prepared for specific locations. Physical models, based on technical profiles of respective energy sources as well as statistical and AI methods are used for energy generation forecasting. The latter require a relatively long operational history of energy sources and relatively long-term historical records of weather data in order to ensure sufficiently accurate predictions. On the other hand, operational optimization of individual components of energy microsystems in several day-long time frames is performed using the Particle Swarm Optimization (PSO*) algorithm. It allows for an optimal equipment operational schedule to be determined for a user-specified periods. Users may plan operation of their equipment by entering times during which individual pieces of equipment shall be running, operation durations and settings (such as: power or rotational speed). Basing on the generated schedule, the system also calculates a number of suggestions, which can be considered by users in the aspect of using consumers that cannot be controlled by the system.

The mGrid research and development project, Globema’s inititative aimed at responding to these most pressing challenges of microgrid operators, has been completed recently. The goal was to ensure a reliability improvement of electric power supply through using a system that would assist in microgrid operational control. It was also intended to improve the efficiency of utilization of primary sources by putting the sources close to consumers. The architecture of the solution consists of two key elements: measuring & control modules and a server with preinstalled system. The modules are responsible for measurements and equipment control. Measuring & control equipment is installed close to the borderline meter, renewable energy sources and controllable consumers with significant energy consumption. It is used for operational monitoring of the equipment, energy consumption control and to control the equipment. WiFi with access points is used as the communication medium. Depending on actual needs, the server may be installed either locally or in the cloud. 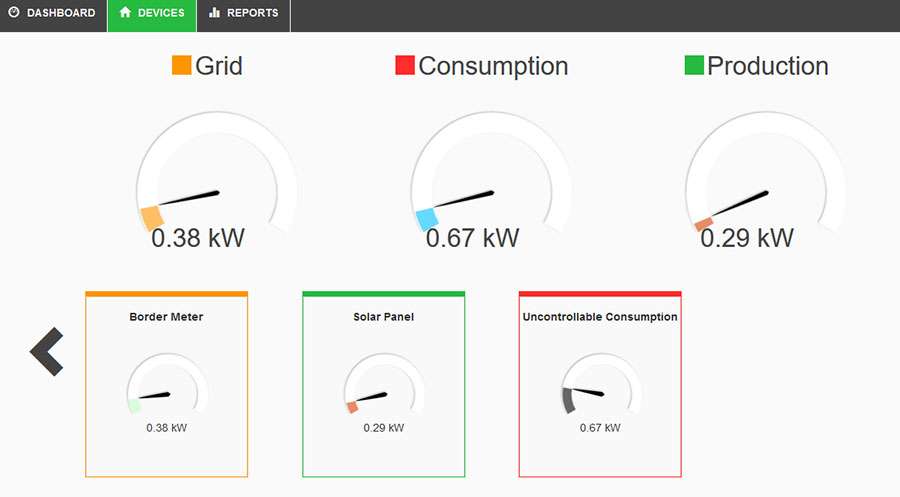 mGrid supports status monitoring, equipment control and generation of optimized operational schedules for consumers (based on forecasted energy generation, demand and user-defined operational schedules). The reports screen allows microgrid energy utilization data to be analyzed. The system improves utilization of renewable energy sources through automatic control of power loads and by providing set of usage suggestions. The mGrid system is intended for both prosumers and for companies having renewable energy sources, who want to improve efficiency of their renewable energy sources use and speed-up the return on investments in renewable energy sources. The ability to control the energy consumption on an ongoing basis or to automatically control high-demand consumers may significantly affect the accomplishment of these two goals. The need to install measurement and control modules and to establish communication with them may be perceived as a hindrance during the system implementation phase. If the equipment is distributed over a larger area, e.g. in a farm, it will be necessary to take into consideration additional data transmission costs.As a result of the system implementation, prosumers will benefit from: 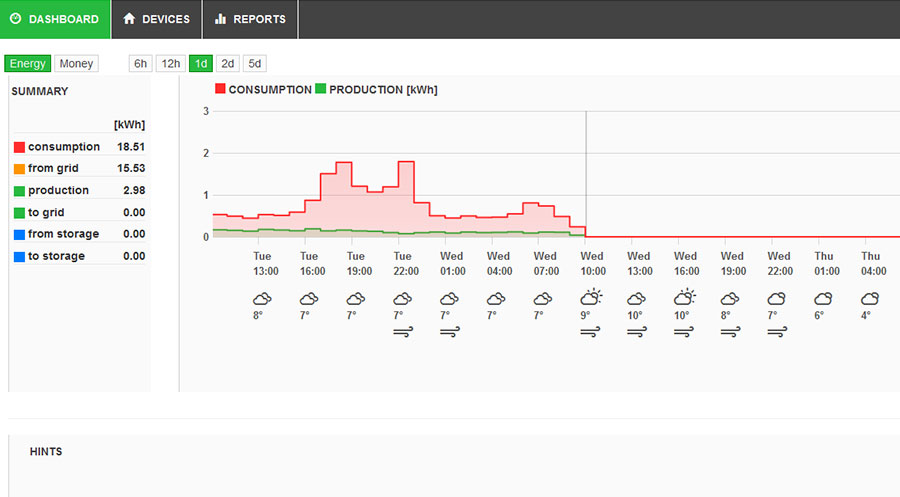 Further work on the system development and microgrid operational optimization will focus on optimal utilization of energy storage and local weather measurements to be utilized in forecasting, as well as on allowing off-grid operation of microgrids. This will permit better utilization of the power and will improve process continuity security in cases of power grid outages. The expected development of power micro clusters and energy cooperatives may be a stimulus for development of this class of solutions, which will support local development of the energy sector and which will improve the energy efficiency of the entire system.

–
* Swarm algorithm/flocking algorithm – particle swarm optimization. A technique which attributes a realistic collective behavior to a group of objects, similar to a flock of birds, a shoal of fish or a swarm of bees. It was developed by Craig Reynolds, who presented in for the first time in 1987 during the SIGGRAPH conference. He noted that by combining several relatively simple rules, it is possible to simulate very complicated and realistically-looking group behaviors. Source: Wikipedia